Aleatory methods, also called chance operations, are often overlooked as a means of generating poems or revising previous drafts. Some view aleatory methods as mere games, or something to engage in just for fun. If we believe in fun, then we believe in taking it seriously. Be careful, however: once you begin these experiments and the discoveries open up to you, you may never go back to methods of poem making that do not take advantage of chance operations to some extent.

Find an old, seemingly useless book. Such books may be found at a second-hand book store, a Goodwill, or a garage sale. A pulp novel, an outdated textbook, a magazine—anything nonliterary works really well. Alternatively, find a few articles or texts online and print them out. And/or use a block of text you’ve written. For this experiment, the more texts, the merrier!

With scissors or an X-acto knife, cut the text up into lines. Do so with abandon.

Once you have at least 30 lines, mix them up, toss them into the air, put them in a hat and pull them out at random. Arrange them in the order that chance dictates. (You can also do this digitally, using a cut-up machine, but we promise it won’t be nearly as fun or generative for making poems.)

Read what has presented itself to you. Find what’s interesting, curious, or just plain weird to you.

While fate or chance has provided you an order, you can also influence the destiny of your creation. In other words, it’s up to you to decipher the message in the code and make something real out of what may appear to be gibberish.

Try tossing out some lines and phrases, and focusing on making interesting juxtapositions from only a handful of lines. Build a poem from these.

Or seek out one of your draft poems and incorporate some of these chance lines into them. Might one of the new lines serve as the title for an old poem draft?

Alternatively, find one of your new chance phrases and make it the focal point of a poem you build from scratch.

Even if you read the lines of text and nothing strikes you immediately, you may still have prepared yourself for something ineffable—a theme new to you, an unknown in the known. You, the poet, are tasked with tackling the challenge of accessing that feeling, elaborating on it in your own manner. This is the crux of aleatory: making decisions based on how the cards fall. 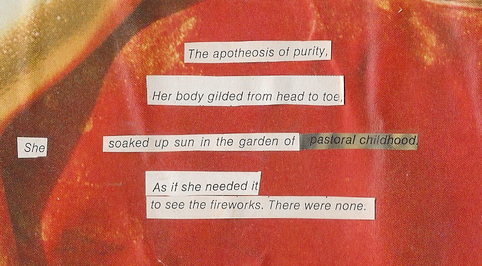